Khuvsgul Lake is located in the northwest of Mongolia near the border to Russia, at the foot of the eastern Sayan Mountains. 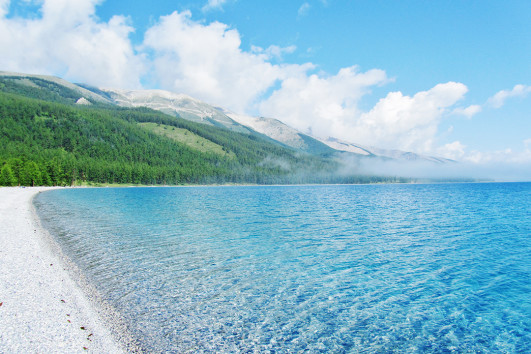 Khuvsgul Lake is located in the northwest of Mongolia near the border to Russia, at the foot of the eastern Sayan Mountains. It is surrounded by mountain ranges, craggy peaks and rolling green hills, which are completed with colorful wildflowers during the short summer months.

The Khoridol Saridag and the Bayan Mountain Ranges are located at the western part, whilst the Munkh Saridag Mountain Range occupies the northern shore of the lake. Khovsgol Nuur starts at the town of Khatgal in the south and stretches towards the border with Russia.

The town of Hatgal is located at its southern end. Four main islands can be spotted on the lake: Modon Khui, Dalain Khui, Khadan Khui and Baga Khui. It is 1,645 m above sea level, 136 km long and 262 m deep. It is the second-most voluminous freshwater lake in Asia, and holds almost 70% of Mongolia's fresh water and 0.4% of all the fresh water in the world. Its watershed is relatively small, and it only has small tributaries. It gets drained at the south end by the Egiin Gol, which connects to the Selenge and ultimately into Lake Baikal.